Apocalypse of John wins the Overall Execellence Award for Ensemble!

At the NYC Fringe closing night awards ceremony, the Apocalypse of John won the Overall Execellence Award for Ensemble!
For a theater company that's all about collaborative creating, this is probably the finest honor we can think of!
Congratulations to the cast, band, crew, and writers! 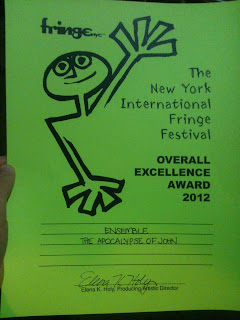 “Destroying props—we call it making an offering to Dionysus. Anything you give me for a show, that shit is going to get destroyed as a sacrifice to the gods of theater,” says Lizz Leiser, director of the 2012 Philly Fringe show called The Apocalypse of John. What could be more appropriate, especially for plays that emerge from the planned chaos of New York’s Serious Theatre Collective?

For the raw material that became the Apocalypse of John, a group of seven playwrights were asked to generate high-stakes ideas, and all came up with stories of the apocalypse. Lizz turns to Jess Conda, who’s tending bar where we’re sitting upstairs at Fergie’s Pub, and asks, “Don’t you think that the apocalypse would happen in Philadelphia?” It’s a rhetorical question.

“Philadelphia is genuinely fucking weird,” Lizz says. So naturally, Philadelphia became the setting for this apocalyptic endeavor. John Derrian, the lead character, must save the earth from numerous archetypal apocalypses, ranging from Biblical forms to zombies to Satan himself. And the show, like all Serious Theatre Collective endeavors, is designed to attract a wide audience.

“We make theater for people who don’t consider theater an entertainment option. We take elements that you can only have live—bands, storytelling—and don’t publish clips of our shows online. The whole purpose of it is being live. We want to make a good product for audiences—we want to make good shit that people have fun seeing,” Lizz says.

Up now at the New York Fringe Festival, the play earned four stars from Time Out New York: “Directed with economy and savvy by Lizz Leiser and featuring a talented ensemble cast, the show is a riot of zippy one-liners and laugh-out-loud set pieces; it’s like watching a bunch of overgrown kids playing make-believe.”

These overgrown kids are open not just to integrating more popular images or forms into their writing, but also to welcoming the new kid. Anybody is invited to be a part of what is an open creative process; Lizz even volunteers an email address for readers interested in collaboration: tstcollective[at]gmail[dot]com. “If you can pick up a pencil, you can join us,” says Lizz.

The process works like this: At the weekly meetings, writers will generate raw material in response to prompts, or in exquisite-corpse-style experiments. Then, a second tier of “lead writers” will take on pulling that material together into a more cohesive form, and then ultimately, a head writer or writers will emerge for each show.

For newcomers, Lizz says, the collective gives training on their method when they first start writing. When they pass around material, they have certain rules. In exquisite corpse exercises, when a scene comes to a writer, that writer has to follow the voice that came before. “You can’t ask questions,” Lizz says, “and you don’t say ‘no’—you can’t write negatives.”

They meet in the Dublin House at 79th and Broadway, where, Lizz says, there’s a quiet back room. “It’s the official bar of our collective. We write and read the scenes to see what works. If they’re really terrible, I fold them I half, so I won’t have to bother. On Sundays, Ricardo [Delgado] and I, [who often work as lead writers], read what we have, highlight good lines, and we put it in the meat grinder to come up with a rough draft of a scene from all the best lines.”

Then, Lizz says, they have a straw man of what the play is, they do a reading, and see what needs to be fixed. Then, four head writers will cycle through revisions, until it goes back to Lizz and Ricardo once more. They have another reading, workshop it. Then, a big benefit of the collective emerges.

“At that point,” says Lizz, “nobody can tell who wrote any line. It’s great because you take the ego out of it. Nobody’s like, ‘this is my precious baby that I pushed out of my playwriting vagina.’”

The collective parents of this precious baby are Lizz, Ricardo Delgado, Becca Worthington, Terry Selucky, Ari Kessler (all of whom share writing credits), and Mike Drummey and Erin Salm (who both wrote and also act in the play). And to see some of the props from Norman and Ursula Stuby that are likely to be sacrificed, click here.

1. Ari, you're the lead Aural Specialist for the Serious Theatre Collective. How does that make you feel?

I've always prided myself on my aural abilities, though I do have reservations about this title.

2. Reviews have likened the music in the show to a sort of "live soundtrack". How does that description compare/contrast with what you were going for?

The music for A of J has always been more in line with the idea of a soundtrack than a traditional musical accompaniment. The live band is a part of the show's world, and so its job is to interact with the characters and act as a sort of guide to the audience as the plot zips through locations and scenarios.

3. Tell us about how you created the music for the show.

The main theme, "Kiss My Ass Goodbye", was written as a stand-alone song way back in the early stages of the script when we were still treating it as a traditional musical. Once we decided on the role for the band, though, the song became a motif for the Upstairs bar and for John in particular. That led me to write themes for the other main characters, and during rehearsals things settled into place organically.

4. What do you do when you're not playing music for the theatre?

5. After all the excitement for The Apocalypse of John has died down, what will you do next?

After A of J finishes its Philly Fringe run, Lizz and I will go into seclusion to work on songs for a super-secret project, currently codenamed "octopus seahorse-saurus". I've said too much already.

Time Out NY Gives Apocalypse of John 4 out of 5 stars!

In The Apocalypse of John... Directed with economy and savvy by Lizz Leiser and featuring a talented ensemble cast, the show is a riot of zippy one-liners and laugh-out-loud set pieces; it’s like watching a bunch of overgrown kids playing make-believe. (One sublime moment of silliness features a shotgun-toting John blowing away a host of hostile forces—including the weather.) .... All told, this is a damned fun party.