Expect plenty of sand castles, but also a wide range of unusual designs, from such past winners as Frank Russo, Anthony Avellino and Lizz Leiser

Frank Russo (r.) and Joe Sloboda work on a castle in preparation for the Coney Island Sand Sculpting Contest, being held Aug. 17.
Playing in the sand isn’t just for kids.

The amateur sculptors, in teams and solo acts, will compete for top prizes of $400 in each of five categories..

Observers will have more than simple sand castles to marvel at. Past winners have tackled a broad range of subjects — from serious topics like domestic violence and an apocalypse, to quirky creations like lounging mermaids and a giant sandwich.

Here’s what these three team captains — all of whom are past winners — are planning.

Whether he’s in the construction yard or the sandpit, Frank Russo is a meticulous sculptor.

A director of construction, Russo’s only weakness is sculpting living things.

“I’ve gotten past a simple alligator and a dolphin, but I’ve got to get further along,” says the humble dad of two. This year, he’s sticking to what he knows.

“All I can really do, because I’m in construction, is square or rectangular figures,” Russo says. “We’re like a one-trick team. We’re going to do a castle.”

But don’t mistake tradition for a lack of creativity. This crew, made up of Russo’s kids and extended family members, will be defending their first-place team win last year for their Harry Potter-themed castle.

With just a knife and their hands for tools, Anthony Avellino and his uncle William Petrosino began their sand sculpting days crafting the New York City skyline. Their tool belts have grown since, but the five-time competitors — and three-time medalists — stay grounded.

“It’s cool to win, but I just like competing and having a good time seeing everyone’s work,” says Avellino, who sculpts with clay on the side.

This year, he and Petrosino, a radio personality at WKRB 90.3 FM, may step away from skyscrapers. Avellino says the duo plan to sculpt a half-buried treasure chest.

He’s aware that castles are the domain of competitor Frank Russo, w ho Petrosino tries to avoid competing against , despite distinct differences in their castle craft.

“My castles come out like a fortress,” says Petrosino. “Russo comes out with this fairyland, ‘Wizard of Oz’-type of thing. I come out with ‘300’-type stuff.” 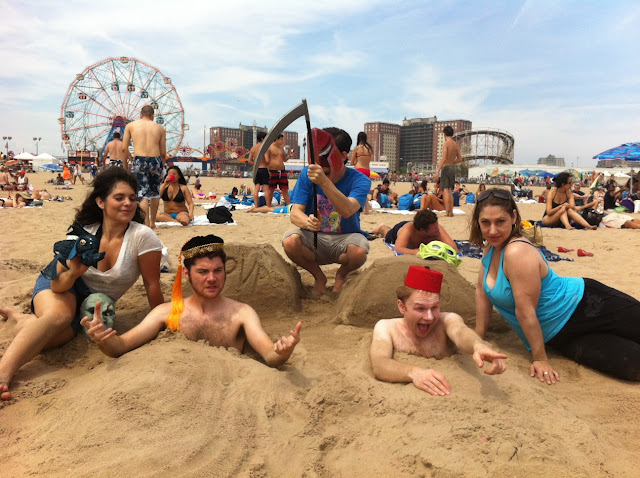 The Serious Theatre Collective is far from serious.

The Collective’s unconventional rehearsal method may be the reason they’re short on design plans. But prepared or not, Leiser’s team has done well in the past. Her first time, Leiser and friends placed third, and last year, the Collective was first runnerup.

Leiser is confident that first place lies ahead. “It’s like in ‘Glee’ — at first they didn’t win, but then they won Nationals.”

The Collective has a lot in common with the Fox hit’s music geeks. “We’ve always prided ourselves in being the underdogs in whatever we do,” says Mike Drummey, one of Leiser’s teammates.

If the Collective wins, they’ll use their cash prize to fund an upcoming project, “Professor von Awesome’s Ghost Hunting Safari.”
at 2:57 PM